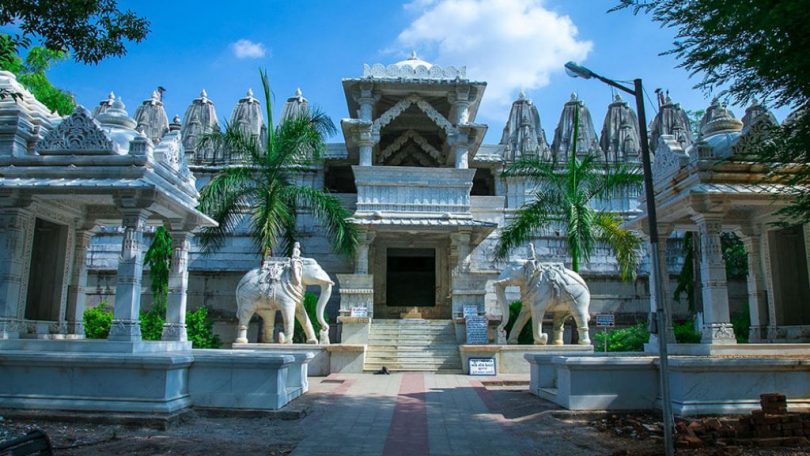 Kumbhariya village is situated at 2 km away from ambaji, danta taluka of banaskantha district. it is historical place with great archaeology and has religious importance. 5 jinalayas of jain religion are situated here. Shri Neminath Bhagwan, the lord of Girnar Tirth, is sitting here. Which is Heritage centre in Gujarat.

In earlier times kumbhariya is known by arasur but after Rana kumbha of Mewar in 15 th century it is known as kumbhariya.

In Kumbhariya is 900 to 1000 year old temples of jain religion. it is believed that in earlier times there where thousands of jain families and many jain temples were situated at kumbhariya.But due to the earthquake, many Jain houses and temples were buried. Now only some families and 5 jinalayas are left.every jinalay has its own ancient story.

If one wants to see great archeology of our ancestors then kumbhariya is best place to visit. The workmanship of the Kumbharia temple is similar to that of Abu and Delwada. First you will see the Jinalaya of Lord Neminath here, the colorwork of its dome is 300 years old.

Mahavir swami Jinalaya is on the east side of Neminath Bhagwan’s derasar. Mahavir Swami Jinalaya is made of marble with 24 small temples. All the idols located in this temple have been brought from underground in the forest at Mahudi.

After Mahavir Swami Jinalaya comes the Jinalaya of Lord Shantinath. Santinath jinalay is also made of marbles and it’s archeology is same as Abu and delwada.There are crafts on many stones which depict the life events of old Tirthankaras of jain religion.

The administration has also built a dharamshala and a dining hall for the pilgrims. In which 48 luxurious rooms and grand dining room have been prepared. For those who want a panch tirth, there is probably no better place than this because nearby around 60 km from this derasar there are many sacred and ancient tirth like mota poshinaa,. Terangana,idar,nana poshina ,tintoi.

Kumbhariya is only 1.7 km away from Ambaji, if you visit Ambaji or Abu don’t forget to visit Kumbhariya, you can feel great archaeology here.