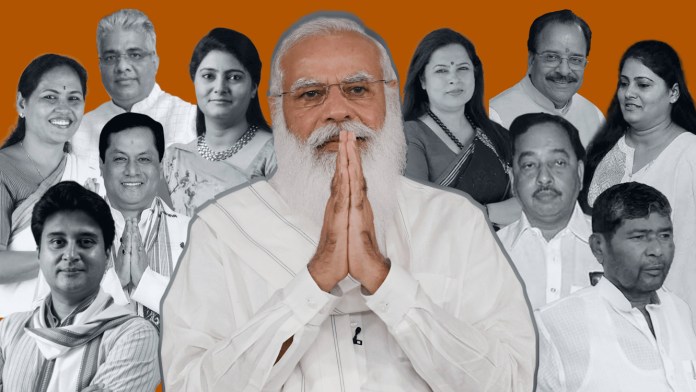 CABINET EXPANSION AND STRATEGY BEHIND IT

In recent cabinet expansion prime minister Narendra modi has made it cleat that those who will work full determination and try to achieve their targets will get promoted otherwise, The way out of the cabinet will be .

The biggest jolt came when the resignation of big heads like Dr. Harshrvadhan ,Ravi Shankar Prasad, Prakash javdekar and Ramesh pokriyal Nishank were asked to resign from their posts. From this decision it is crystal clear that image of Modi government is not in good position .to restore this good  image the change was necessary and by this change those who were worked really hard during crucial time and stayed committed to their work will get rewarded and given higher position in cabinet births.

IN 2022 legislative elections coming in seven states and from this point of view cabinet expansion took place .in this states include uttar Pradesh Gujarat punjab Himachal Pradesh goa etc. from this point of seven slots of ministry given to uttar Pradesh this was the huge step because the path of success for loksabha goes from  uttarpradesh and to make them happy is first  step any government or prime minister will take. and behind Member of parliament from Varanasi modi has to shown to this people that I care for you people so don’t worry . secondly the target is to save home state of Gujrat from the rising power of AAP in Gujrat and their strong rival congress because in 2017 Bjp hardly got able to get 99 seats out of 182 when they set the target of 150+ and unable to achieve 100 only so this is alarming situation for PM modi and HM  Shah that only they both can change this situation otherwise no other Gujrati leader has potential to improve their performance .Other plan behind this CABINET EXPANSION is that to reduce burden on ministers because earlier every minister were handling two to three portfolios and due to this it was very hard to handle all three with only one super man so now PM modi has keep this point in mind given very less burden and high targets so that they work towards their work sincerely and the image of government improves .

Third target try to achieve by CABINET EXPANSION is  to make CABINET young .by this means that the average age of cabinet now is at 58 earlier it was 60 by this PM modi has try to give message that he will promote talented young generation and not rely on old horses for longer time Anurag Thakur jyoti raditya, sindhiya, mansukh mandaviya and kiran rijiju  all this are young force and modi has rewarded them with CABINET ministry due to their excellence in former ministries. fourth target of pm modi by CABINET EXPANSION is to give importance to their allies many ministries are allotted to their allies like JDU and Apna dal which help in their local areas in loksabha election .leaders like pashupatinath paras and anupriya Patel were given chances to work in modi government. sixth target by CABINET EXPANSION is  to give proper importance to women and north east and minorities with around 48 tk 49 minister are from OBC SC and ST by this modi want to tell that I care for all not just for some high standard people and corporates. By all this we can say that from this cabinet expansion pm modi has tried to achieve many small targets which will help him in near future

With election coming in next year in December 2022 modi has given a huge space for Gujrat in CABINET EXPANSION . total 8 persons are in Team modi including modi and Amit in it and this is total 10 % of total CABINET and three new faces like Darshana jardosh ,devusinh chauhan and Dr.mahendra munjapara has given place.all this given with their personal importance like Darshana jardosh it strong allies of state Bjp chief C R Patil and to make her Happy and settle her score with patil she has given minster post and she belongs from obc community so to attract their votes in Gujrat this decision has taken and Another two persons like devusinh chauhan MP from kheda  has earlier was MLA and holds specific cast factor due to this he has been given place in portfolio and Dr.mahendramunjapara is from surendranagar to give this place a strong representation he has been allotted a ministry and he belongs from koli community of gujrat which is very important Before Gujrat legislative assembly elections so by all this and to make patidar their strong vote bank mandaviya and rupala has been promoted by all this it seems that to make Gujrat leadership strong and powerful all this decisions in CABINET EXPANSION took place and from this task multiple targets will be achieved …