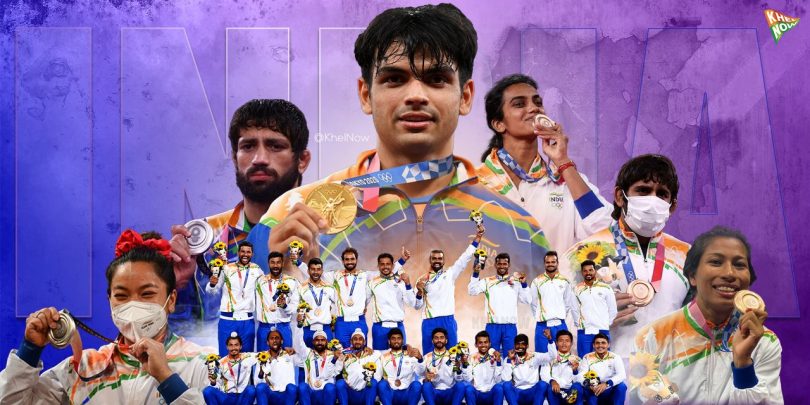 Since the Olympics began it is one of the Best Performances of India in the Olympics. After a long wait, India gets its First Olympic gold in athletics.

after a long span, we won a medal in hockey. our girls showed their strength and won medals for our country. some known sports person was unable to get a medal. but, some unknown faces have did it for India.

Both hockey teams of men and women were trying to perform best for the country and now in Olympics, they get their bestperformance in recent times.

Women’s team after losing first two games and later reaching into the semi-finals.girls showed their character and fight satisfactorily.

in boxing, India expected more medals but unfortunately, we get only one.

wrestling is the event that has never disappointed in the medal tally since 2012.this time Ravi dahiya and Bajrang did it for India.

Mirabai chanu losing badly in016 Olympics come back stronger in Tokyo 2020. Given India had a fabulous start from Day one. given India a silver medal.

BEST PERFORMANCE WITHOUT A MEDAL :

The women’s hockey team after leading in thefirst half lost the battle in the second half.

Krishna punta made it into the finals. thrown her best throw. but, this doesn’t get her a medal. she ranked sixth overall.

Tennis players didn’t playaccording to our expectations ankita  raina and sania Mirza can’t get it for India.

One which was most popular was golfer Aditi Ashok staying second till the last round gets the fourth rank by the missed bronze medal.

Vinesh fog at mary Kom Manu Bhakar Dipika Kumari was the big hope for India  They tried their best but, unfortunate to win a medal for India.

Despite many odds and problems during the covid time players prepared well. They gave the overall Best performance Till now. India gets its first medal in athletics.

The hockey performance was fabulous. Golf was the new sensation.India gets the forty-seventh  rank. 1 gold 2 silver and 4 bronze. Gold on last was the biggest moment for India.

After fighting from all the problems players fought well and given their Best. Other games which were unable to find a place on the podium were also best performers.

Given India a Hope to give their best in the upcoming Olympics. this way India complete their Tokyo Olympics 2020 journey.

PM Narendra Modi has given moral support to players. Awarded those who performed well. kept his promise of ice cream and pizza.

The whole country celebrates as they have won a medal. This made every player proud that they play for India .