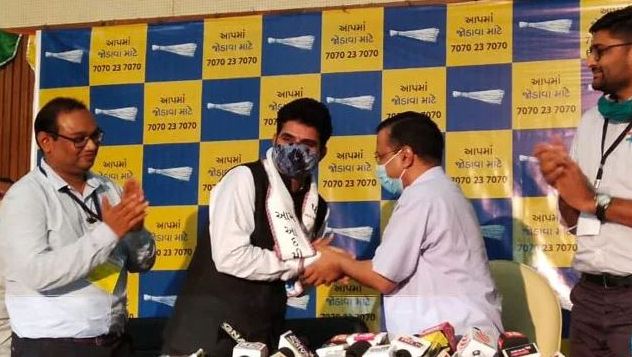 AAP : A NEW SENSATION IN GUJARAT

Since the formation of A Gujarat state in 1960. Gujarat has always been the battlefield of only two parties 1) Indian national Congress (congress) 2) Bhartiya Janta Party (BJP) . earlier it was Janta party in place of BJP. but now in recent times the politics of Gujrat is experiencing a change in politics with the arrival of Aam Aadmi Party in Gujarat.

It is generally said by Congress and BJP leaders that people never accepted third party in Gujarat but now it seems like people are trusting party like a Ray of Hope because people are gathering at their general meetings and many popular personalities like ISUDAN GADHVI ,MAHESH SAVANI,PRAVIN RAM ,VIJAY SUVADA etc. many more popular faces who has their strong base in their area and dedicated fan base are joining a party

SURAT : A RAY OF HOPE

During municipal corporation elections this years results were expected BJP or Congress wins But during this year there was one exception and result behind this was the AAM AADMI PARTY . it is not the first time that Aap has participated in election in Gujarat. they took part in Gujarat legislative assembly elections in 2017 but they have to lose it very badly

But, during this year municipal corporation elections of Surat there was a surprising change in in results. because Aap won 27 seat out of 120seats. And major set back was that the grand old party like congress was unable to open their account and first time aap got chance to seat in opposition in SMC surat.

Change in state party chief in Gujarat took place before election and the responsibility of aapgujaratwas given to A young , energetic and educated leader GOPAL ITALIA it was the mastestroke by state general secretary Manoj sorathiya.

Aap contested in all six municipalities of gujarat like Ahmedabad rajkotsuratbaroda but they only succede in surat only .they fielded all young leaders in election and promised quality education quality health services which theit government had done in delhi and this resulted as great success .in this one girl named payalpatel become the youngest councilor at the only age of 22 year this type of positive approach helped Aapsucceced in suratsmc

FUTURE OF AAP IN GUJARAT :

Arvind kejriwal cm Delhi is now totally focused in expanding his party in gujrat which is just formed in 2012 as a result of agitation movement and trying to make way in between BJP and congress now he has announced that their party will contest in Gujarat 2022 legislative assembly elections. and for this they have started to meet people in village by jansamvednayatra and offering to all popular faces to join their party now it is not easy as it looks now we will watch what are the challenges and benifis for Aapin Gujarat

Joining of popular faces : with the inclusion of isudangadhvi , Mahesh savani , Pravin ram and vijaysuvadaall this are popular and have their dedicated fan base

Having larger social media volunteer :they are getting full support from their SM team and by this many young people are volunteering for aap on social media

Positive approach :they are doing different type bof politics which includes health education infrastructure and not religious matters and cast based politics like BJP abd Congress do

Second is that it is not easy to break strong holds of bjp and congress in cities and villages respectively.